Have you heard of this new tool that has turned education on it head? Unless you live in an unplugged world, you probably have.

What is ChatGPT?
It is a creation of OpenAI, and as of this podcast, is currently free to explore. In fancy terms, it is a chatbot that uses a language model called GPT-3 which means Generative Pre-trained Transformer 3 to simulate conversations with users. It was released in November 2022.

In plain English, it’s a very, very cool tool to have in your pocket.

When I found it, it was full on panic mode, I mean, this was going to change writing education forever! But, after I got over my panic and fear, I started settling into reality, meaning ChatGPT and tools similar to it will be filling our future. What feels unreal now will be an everyday experience in the “then.” 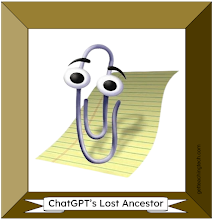 zIt is true. ChatGPT is unreal in the sense that it uses AI to write essays, short stories, plays, you name it. Everyone I’ve spoken to instantly thought of those college essays required with most applications and were speechless when they learned of this bot.

The scary part is that it does a really good job of composing what you ask of it, and because it uses AI, it’s technically not plagiarism, and therefore is not traceable by the standard plagiarism checkers. This brings up the ethical question of cheating… since it’s technically not copying… and is creating original work… does this mean students would have to disclose that they used ChatGPT?

Once I switched into problem solving mode and went looking for ways this tool can be useful to educators, I found some really phenomenal uses for the bot. Even further, speaking with colleagues and perusing social media brought about a plethora of positive uses, which made me feel so much better about this crazy tool.

A colleague said that while she wouldn’t want her son using ChatGPT, she herself could use it to learn about what her son was studying, and therefore be better equipped to help him with his homework.

We also talked about how if we were at a meeting and the presenter shared something we hadn’t heard of, (which never happens!) we could again go to the bot and ask it to teach us about that topic.
Another teacher decided to have the bot write a play on the Golem, a topic his class had just wrapped. The bot wrote the play and the class read it. They then had it write a second play, and compared the two. Finally, he had the class add missing details to the play to make it a richer read.
On the socials you’ll find countless ways teachers have found to use ChatGPT. In fact, here is an infographic that shows eight ways teachers can use ChatGPT in the classroom.
Over the past few weeks, we’ve asked the bot to do countless things for us at school - write essays, yes, but we’ve also used it as an Alexa, just asking it questions. A really neat try was when we asked it to write a decodable short story using a specific vowel pattern to use with 2nd grade and it did it!

ChatGPT has taken the educational world by storm. If we focus on the fear it’s raised, we’ll be in trouble. As long as we keep looking for productive, positive uses, it could really have a positive impact on education.
// 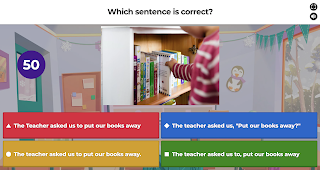 This week I got to play Kahoot with 2nd graders and it was a blast! It reminded me how much fun Kahoot can be, and that yes, 2nd graders can handle it!

We played a writing review game that covered the basics they've been practicing in 2nd grade writing. It was super easy to put the Kahoot together, took about a half hour, which is less time than it would have taken to make a paper/pencil review. 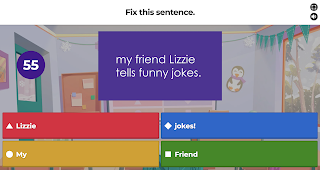 Each teacher did ask for the results of the Kahoot when we were done (which Kahoot provides.) Once they get the answers, it's like having a Formative Assessment right in their hot little hands!

Kahoot is SO easy to use for Formative Assessment! Whether you make your own Kahoot or you use one of the thousands and thousands of pre-made Kahoots (as of this moment there are more than 40 million ready-to-use Kahoots!) The best part about using Kahoot for Formative Assessment is the level of engagement soars! The kids are so tuned into the game, and regardless of whether or not they know it's a review quiz or not, they (at least the kids I work with) love playing!

One more tidbit about Kahoot - you can use it as a pre-assessment, too, if you want! Pose the Kahoot in such a way that you know the kids don't know this "stuff" yet because you haven't taught it. You want to see what they know before the unit starts. Then, play the same Kahoot again (ghost mode!) and see how everyone did before the unit and again after the unit!

However you choose to use it, Kahoot is a fantastic (and completely FREE) tool (with upgrades availalbe) that you can use tomorrow. Heck, you could use it today if you're reading this post in the morning!

It's the beginning of a new year... that calls for a new invention...

My goal as a technology coach is that when I share a tech tool with teachers, and model that tool with their students, and create lessons with the tool that teachers can then (hopefully) take the tech tool and begin using it on their own. Transfer of skills.

As a technology teacher, when I push in for tech with the kids, my hope is that the technology skills we explore transfer into their daily learning. This is most prominent when we're coding - problem solving, perseverance, breaking problems into smaller chunks to solve, debugging (looking for errors) are all coding skills we practice. The hope is that students take those experiences and feelings (the feeling of being successful in breaking a problem into smaller chunks) into their reading, writing, and 'rithmetic. Transfer of skills. 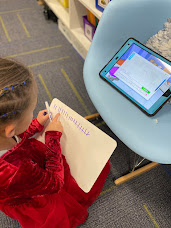 There is also a reverse of that. When kids are learning strategies for reading unknown words, or tricks for writing with juicy words, or tools to help with subtraction, the hope is that those things learned transfer to when we're exploring different tech tools.

Recently, I was filled with warm fuzzies as I watched this transfer of skills happen twice in one week! And at opposite ends of the building, too!

8th graders have a big unit every December called Campaign for a Cause where they research different local causes and try to persuade their classmates to vote for their cause. This unit involves watching and creating PSAs. The 8th grade team was blown away by the transfer of skills this year in the PSA making. The kids took ideas directly from the PSAs they watched and embedded them into the created PSAs. Taking that one step further, the winning Cause created a second video that also followed what they had learned, further solidifying the learning. 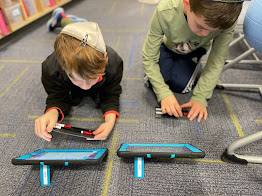 Boddle is a favorite activity to play in our lower grades. Last week in 1st grade, without prompting, students got out their number racks and dry erase boards so they could use the strategies they have learned during math to help them succeed in their favorite math game. The kids are learning to transfer skills young, taking what they learn in one area and using it in another, as a way to achieve success!

Email ThisBlogThis!Share to TwitterShare to FacebookShare to Pinterest
Labels: Campaign for a Cause, coaching, teaching, tech skills, Transfer of skills

That's the title of the books, or at least most of the books, that the 4th graders wrote as for their summative project of their Digital Citizenship unit. Working in groups of two or three, students had to search their brains for online safety tips they gathered over the duration of the unit and put that to good use: teaching other kids!

Linked below you'll see their books, created using Book Creator, and we hope you and your students can learn something from reading them! 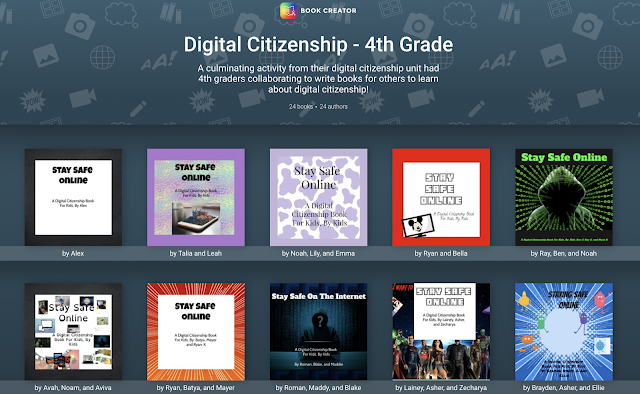