Today was So. Much. Fun!  Fifth grade got to partake in a GooseChase this afternoon as a wrap to March is Reading Month!  It wasn't a typical Battle end, but-

Oops.  Gotta back up a moment here.

Every year, our fifth graders participate in a Battle of the Books.  They are placed in teams, given a stack of 21 books to read (everyone on the team must read a certain number of books, and the team must ensure all books are read), and a variety of tasks (team song, team colors, team cheer, team name, etc).  The month culminates in this huge battle that takes an entire afternoon and is So. Much. Fun.

But.... thanks to GooseChase, Battle didn't exit! 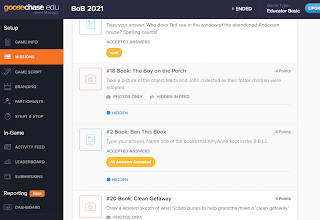 GooseChase is an online scavenger hunt platform that has a special edu version perfect for schools.  The teachers modified the questions so that they would work with the GooseChase Platform, turning questions into missions that the kids had to complete.  GooseChase is an app, so we added it to the iPads and gave each team an iPad.  We set up the teams on GooseChase in advance, so the kids only had to click "play as guest" and enter the game code and password.  Super simple!  (and since no information was collected, safe!)

Instead of the standard "write the answer and race to turn it in" the teachers modified the questions so that kids had to type answers, submit photos, and submit videos.  Instead of questions being one at a time, every group in the same place at the same time, GooseChase allows you to set up automations.  That meant that questions were released in groups at a set time interval, and teams worked through as many questions as they could during the battle.  Instead of everyone being in the cafeteria, each team at a table, judges sitting across from the teams, we used Zoom.  The teachers were in Battle Headquarters, each team was in their own room with a teacher supervisor.  And thanks to the set-up, even the kids at home (who had "battle buddies" on site) were able to be actively engaged in this year's Battle!

Every educator can set up a free GooseChase EDU account and create unlimited games.  You can only have one active game at a time, and no more than five teams.  If you need more than that, you need to upgrade your account.  (Note: We did the whole battle on a free account!)