This past weekend I found the COOLEST (yes, it's worth the all caps!) website to use for stop motion (and so much more) with students! I've written about stop motion in the past, and all that you can do with it. For iPads, my favorite app is the free version of Stop Motion Studio. It is very user friendly, and I continue to use it with our lower grades as they still use iPads. Many of our older grade students also prefer using Stop Motion Studio on their own tablets at home.

For Chromebooks, we've been using the Chrome App Stop Motion Animator. It is a great introduction to stop motion, and is super simple to use. But saving your work is a little clunky, and it is pretty basic (which for the most part, is really good when introducing the concept to students!)

If you're looking for something that can do just a tad bit more (or, really, a lot more) then check out Wick Editor. It. Is. SO. Much. Fun! The editor still appears to be in a bit of a beta mode, but is fully functional on so many levels. I love that it is simple enough for basic learning, but the accouterments with this tool are beyond!

After I explored the platform a little bit, I perused the privacy policy. Even though my students are exploring Wick Editor without creating accounts, it's always important to know what information is being collected, and what's happening with that information. They have a section specifically on children and privacy that you can read for yourself. We're using the platform without accounts and I am totally good with that! 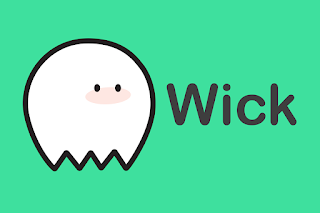 This morning when I got to school, I grabbed my student Chromebook to test it out and ensure that when students tried to access it, they wouldn't reach the doomed block screen. Then, I got to lead one of my favorite types of lessons, the "I dunno?!" lesson. Here's how that went:Once the class was gathered in front of the Smartboard, I told them about this new platform I found for stop motion animation. The kids bubbled with excitement, as we started exploring stop motion a few weeks ago. I opened the Wick Editor and showed them what I knew - how to add an element, to play the animation, to add a layer, and how to delete an element. That's it.

When they were then unleashed to their own Chromebooks, and they started asking "how do I do this?" I told them that I had already shown them everything I knew about the platform, and it was up to them to learn more. Yeah, I had to repeat that a few times, but by the end of the period, these kiddos were figuring out the coding aspect and beyond! (Did I mention this can be used for coding animations and such, too?)

I was beaming with pride watching these third graders Google questions that they couldn't figure out independently, as they taught each other how to change the frame rate and the background. They found the apps that can be added to the editor for surprisingly fun elements. As we wrapped, one group was working on coding a robot to dance.

All this after 20 minutes of exploration. Student led. I call this a WIN!