We've played around with CoSpacesEDU many times over the past few years. The 7th graders have been doing a very cool project that involves recreating a capital city, and we've dabbled in other areas, too.

But this is by far the coolest project we've done thus far!

6th graders spend a good deal of time exploring space. They dive into gravity, seasons, weather, planets, and a ton more. We decided to take a risk and really dive into space using CoSpacesEDU AND ClassVR. 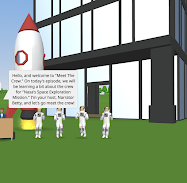 6th grade students created their own space exploration where they had to teach a concept or two from the unit. Even better, we're going to be exploring those Space(s) on the ClassVR headsets! They got super creative, too. One group created a roller coaster for each planet. Several groups have sounds playing in the background to add ambience. One group brought in a rocket launcher (virtually) that blasts the project off into space, literally! 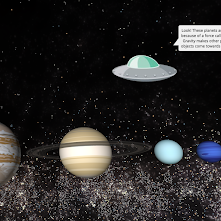 I am not well versed in CoSpacesEDU, not embarrassed to admit that. I am pretty solid with the basics of navigating and coding the spaces, but the nuances, eh, I leave those to the kids. And this group took things to a whole new level. They took the basic lessons I gave them and wow!

I'm super excited for the headset viewing party where they'll experience each other's world's in virtual reality. The headsets should be ready soon!