Break out the Robots! 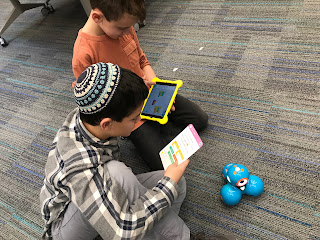 Among other tech fun last week, 6th grade kicked off their robotics unit by spending some time with Dash and Dot.  If you ask them, they'll say it was pretty fun, as would me and their science teacher!

Now, these kids have spent a bit of time with Dash and Dot over the past few years, mostly using the Go app, and maybe a bit of Path.  This time, though, as they are preparing for further robotics exploration, I switched it up on them a bit.  Or, as I told the kids, I threw them to the wolves! 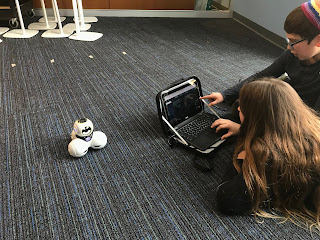 To kick off the unit, the kids were given either a Dash or a Dot, along with a challenge card from the Learn to Code Challenge Card Deck.  Then, I told them that the only app they had access to was Blockly.  Which meant they had to actually do more than record funny sounds and drive Dash around the room. 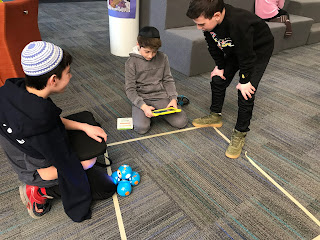 What I love about this group of kids most?  They rose to the challenge.  They worked their way through the Challenge Deck one letter at a time.  They made tape squares on the floor and persevered through challenge after challenge.  Dot became a magic 8 ball, a petting zoo, and quiet the entertainer, too. 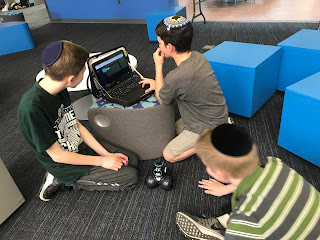 Friday, the last group had their introduction.  As that particular group had several students who are rather advanced in coding, we pulled out, for the first time, Cue!  Which meant on Friday, during the last period of the day, there were eight robots working their way through a series of tasks, and a full class of kids actively engaging in the challenges!

The sights and sounds of learning on Friday afternoon were the perfect way to end a long, long week!