Ever heard of Genius Hour?  Or 20-Time?  In a nutshell, it's the concept of giving students one day a week to work on any project of their choosing...  Such a novel idea - giving kids time, in school, to learn something they wanted to learn?  Wow.  Enter Nicholas Provenzano's 20-Time projects.  Projects his high school students experienced for a year.  The experience these kids had... made me wish I was a student in Mr. Provenzano's class!  If you have a little bit of time, you have to watch the culminating TEDx talks the kids did.  It will be well worth it. 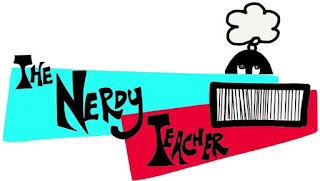 Also known as The Nerdy Teacher, Nick is an incredible educator, innovator, and person.  In his blogs, Nick shares himself with such authenticity, it's hard not to be inspired. One of his posts that really landed with me was one about asking for help.  For some people, it's easy.  For others?  For me?  Ehhh, no.

The post that touched my heart?  This one.  As someone who has battled depression and anxiety and whatever since my early teens, I've always kept that part of me hidden, like a dark secret.  After reading Nick's post, I realized that I am not alone.  Shortly after reading the post, I spoke out publicly (read: FB world) about my depression for the first time.  And I haven't hidden it since.

In addition to being an incredible person, and educator, Nick is one of the founders of #EdCampDetroit (which is coming up in May if you want to register!)  He's also an author (check out his books!)  Lots of fun stuff on Nick's twitter feed, too!