Earlier this week, a first grader asked why we seem to be playing so many math apps during tech time. I told her that it's because everything, everything, EVERYthing is math! The answer satisfied her curious mind, and so I proceeded to introduce the new math app for the week.

The truth is, math is one of the simplest subjects in which to integrate technology. There is a plethora of math apps solely for fact practice (some rock, some sink) and there are even more apps that work in the problem solving realm. In my head, knowing problem solving is a critical skill, I strive to find engaging ways in which kids can practice.

Some of my favorite math apps are (in no particular order!) 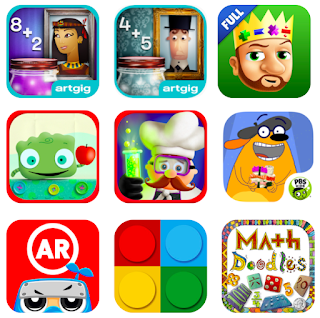 The majority of these are problem solving games that reinforce basic math facts, all with a little twist. Math Ninja AR and Fetch Lunch Rush use physical movement to engage the kids. Mystery Math Museum and Mystery Math Town incorporate a story and (obviously) mystery element. King of Math and King of Math Jr are great for logic exploration at all levels. Math Brix brings in the good ole' fashioned lego blocks to supplement. Math Doodles is a personal favorite, because it takes me back to the fun of a game we used to have in the computer lab back in the day, Math Arena, and because it's doodle style imagery and animation make it memorable for kids exploring concepts like symmetry, angles, and more.

In addition (notice the math pun!), if you have access to an Osmo kit, their math games are unsurpassed - Numbers, Tangrams, and the newer, Math Wizard sets, make screen-time tangible! 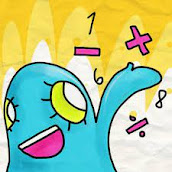 As an aside, the game we played in first grade this week was called Math X Creature. To help make direct connections to their math lessons, the kids first completed a practice activity in Seesaw. I created it using screenshots from the game, and then we walked through the slides together to practice. It made the game waaayyyy smoother for the kids to play! I love the game because it is self-correcting, and it challenges the kids to think differently as the work through their math facts.

Yes, most of these are iPad and tablet apps, but some have versions that work on the web, so definitely consider spending some play-time exploring!